The Beginning and Beyond of Kingswood Baptist Church 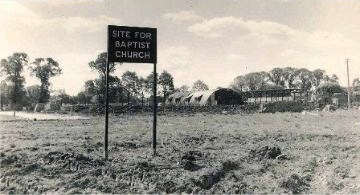 The site for Kingswood Baptist had been selected from several offered by the Basildon Development Corporation who had allocated one site to each denomination in each estate of the New Town of Basildon. The Southend Committee selected this corner of the field, which at that time was still a farm, which included cows standing up to their knees in mud!

The church was to be named Kingswood Baptist E B Walling Memorial Church.

The only houses were the beginning of the area in Witchards, where Frank Sampson together with friends from Southend, mostly from Shoeburyness Baptist Church, had started to visit the new arrivals as they moved in. The church began by meeting together for Prayer and Bible Study in the home of Rhoda Warren, another friend and contact of Mr Sampsons, who had recently moved into Methersgate.

When the Primary School opened across the road in September of 1957 we began to meet in their hall on Sunday Morning for Sunday School and in the afternoon for a Church Service, while the Manse was being built.

In what was I’m sure a divine inspiration from God, the Southend Committee were led in a quite unique decision, to appoint a minister for the, as yet, a very tiny Fellowship of Christians, who were not even yet registered as a Church! Rev Cyril Rusbridge, at that time in Bristol, was invited to take up the post and graciously accepted the call to come. 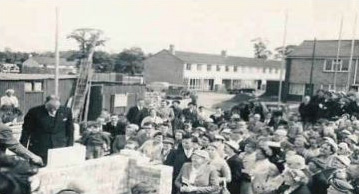 The Manse was completed in January 1958 when his family moved in. Rhoda in her booklet describes the Manse as a ‘lighthouse’ as they kept their landing light on constantly – the only light in around in the dark that was Kingswood. February 1st 1958 saw Rev Cyril Rusbridge officially inducted as the Minister and building of the Church continued with much fund raising from various sources. So the fellowship was established and in March 1958 Kingswood Baptist became officially a member Church of the Baptist Union when 23 founder members were joined together. A week or two later we held our first Baptism service in the pool in Laindon Baptist Church.

With the opening of the building in October 1958, in true Baptist style, the building was flooded several inches deep just four days before the planned opening. The builders brought in a lorry load of sawdust with which to soak all the water up, and over this was laid the floor you see today. But this was not the end of our water ‘baptism’ – just a week later the Baptistry was filled for the first time – AND IT LEAKED !! – a large amount of water spread out over around two thirds of the floor. We still managed to baptise four new believers that day. When the architect was informed of the problem his comment was ‘I didn’t realise you actually filled it up with water’ – it appeared it had not been ‘tanked’ waterproofed! The nice blue tiles then had to all removed and a black bitumen seal was applied to the floor and walls so we ended up with a black baptistry with only a blue surround at the top. 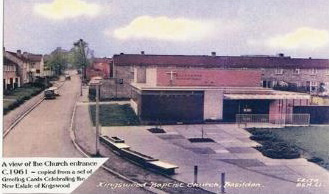 Other activities soon followed, a regular weekly Open Youth Club, a Girls’ Brigade and Boys’ Brigade Companies, as well as a twice a month Mother’s and Baby clinic. Under Cyril Rusbridge’s dedicated leadership the church grew and developed in a genuine family environment

Cyril was followed by the Rev Ken Welford in 1968 and continued the ministry for five years before moving to join the Leprosy Mission as an administrator.

The Rev David Gardner accepted the call to come to us in September 1974 and so began a new phase and growth in the fellowship. David brought a new dimension to the worship and teaching of the fellowship and Kingswood had a ‘new awakening!’, a new appreciation of God’s Holy Spirit

and His working in our lives. By David’s teaching and his love of music we were enriched and the Church grew. David left the Church in 1992 pastor a church in Burwell, Cambridgeshire.

In September 1994 Rev RIchard Ellingham came to us from Spurgeons college with his family. The fellowship continued in growth under his leadership, during his continued studies with Spurgeons College passing his final qualifications for ministry. After about five years Richard felt a call to take on a chaplaincy in The Royal Navy so he left Kingswood in 1999.

In May 2002, Rev Stuart Woodward came to us with his family – the results of his ministry, leadership and teaching, with a team ministry and the assistance of Stuart Elmes and Adele from October 2006, was obvious for all to see – increasing membership, increased attendance at services and a desire to increase space for more people with plans for an extension and/or a new building. Thanks be to God for all His blessings of 50 years !!!

Excerpts of Address delivered at the 50th Anniversary Celebration on October 4th 2008 by John Watson, a Founder member